First of all, thank you to everyone who took the time to complete our survey that ran in October this year. The goal of the survey was to follow up after the 2015 survey and see how things have changed or remained the same. Therefore, many of the questions were the same as you saw in the 2015 survey. The results of the survey were first presented at the TORCA AGM on November 28, 2018 but a full report on the results was promised to share with the wider community.

In total, 152 people completed the survey. Again thank you for your input!

The first two questions asked about the events that TORCA holds and if you knew about them and which you’ve attended. This is where it was eventually pointed out that trail days of all things were not included in the list and I apologize for that goof. Of course trail days are the main event TORCA puts on roughly once a month and we hope that most people are aware of them and that many of you attend them too.

The figure below shows the results. We were happy to know that the majority of respondents know about the annual AGM, group rides, the annual fundraiser, the TORCA 500 race series, Take a Kid Mountain Biking Day, and the TORCA trail challenge. We are also happy to see that roughly 1/3 of respondents have attended the annual fundraiser (it’s always at the end of May by the way!) and the race series (which will be coming back for 2019 and you should be very excited!).

We continued with questions about your riding behaviour. As shown in the chart below, 40% of respondents ride 1-2 days a week in the Tri-Cities and a whopping quarter of you ride 3-5 days! Another 24% ride a couple times a month. Needless to say, we ride a lot (and who can blame us?!)

Saturdays and Sundays were by far the most popular days to ride on (both at 72%), which makes sense since it’s the weekend (duh!). However, Wednesdays and Thursdays are also popular at 34% and 35%, respectively, while the other weekdays sit at 24-25%. This shows that respondents like to squeeze in a mid-week ride as well.

When asked who you mountain bike with most often, 38% of respondents said they ride with friends while another 38% said they ride alone. This is where I commented “that’s so sad” and the crowd burst into laughter at the AGM. You guys really got me stuck in that giggle! After re-composing myself, I shared that while it is very understandable to ride alone (we may not get a ride in otherwise!), it is important to stay safe:

Another 11% said they ride with their spouse/partner/significant other and several of you added in the blank that you ride with your dog. How could I forget an option in this question about riding with man’s (and woman’s) best friend?! I myself enjoy riding with my canine buddy. Please make sure you pick up after Fido and that he/she is under control at all times.

When asked how long you have been mountain biking, a whopping 62% said more than 7 years, followed by 19% who said 4-7 years, and 16% who said 1-3 years. Not only does this indicate that the survey respondents are no stranger to this two-wheeled hobby but it also indicates something less cheery… This means that our survey is not reaching the entire mountain biking demographic because we all know that there are lots of people out there just starting in the sport. To TORCA, this shows that we have to figure out ways to expand our social media reach beyond those that are already very familiar with TORCA. You can certainly help with this! Tell your friends. Tell people you meet on the trail. Spread the message! The more members TORCA has, the more clout we can have with land managers and governments to tell them mountain biking is an important part of our community.

With 2/3 of respondents saying they’ve been riding more than 7 years, it was of course then no surprise that 44% of you consider yourselves advanced riders and 20% consider yourselves experts. It’s a good feeling when we progress over time, isn’t it? Another 29% said intermediate level, with very small percentages of novices and beginners. This again indicates the survey didn’t reach those new to the sport, meaning we’ve got work to do on how to communicate better.

The majority of respondents (68%) ride a full suspension bike with 130-160 mm of suspension. 24% have more than 160 mm and 25% said they ride a hardtail. Surprisingly, 20% said they ride a road bike! That’s a good off-season choice when the trails need a break. You guys are also a humorous bunch… I wonder who has a beer bike?

Now, when it comes to what kind of riding you do, it’s no surprise that with those kinds of bicycles, you mainly ride “all mountain”. There’s a little xc and downhill too. Very little people go to a bike park. Hardly anyone does dirt jumps, trials, or cyclocross. A small percentage ride road and commute by bike too.

When it comes to where, Burke Mountain remains the network of choice (and we know that because the parking is getting a bit busy, right?! More on that later…). Eagle Mountain is a close second, followed by Bert Flinn. These results are no different than in 2015. People still haven’t found Sugar Mountain (it really does exist!).

Furthermore, 61% of you mountain bike at night and 39% don’t. I get it; it’s not everyone’s cup of tea. 46% of respondents participate in mountain bike races and 54% don’t. But we hope you’ll give a TORCA race a try though. They’re friendly and don’t need to be competitive. Also, good prizes!

The next question asked whether you’d like to see TORCA offer a trail building course. The results show that 45.4% said yes, 47.4% said no, and 7.2% said maybe. Quite the split down the middle on the “yes” and “maybe”. We’re assuming here that more information is needed before the “maybe” group can really decide and we wholeheartedly agree. A better question would have been “would you like to see TORCA offer a trail building course like the NSMBA does?” where there is a theoretical part and a building part. You can always provide your thoughts by emailing us ([email protected]) or reaching out to us via Facebook and Instagram.

The next questions asked about your thoughts on the networks and trails themselves. 54% of you are satisfied with the range of trails available in the Tri-Cities while 37% said maybe. 9% said no. When asked what ONE thing needs the most improvement in the Tri-Cities, 38% said climbing trails. 18% said connector trails and 13% said signage.

I then delved into the 131 comments we received on what would make the networks better and what areas need improvement. Themes quickly emerged and I tallied them up as following: 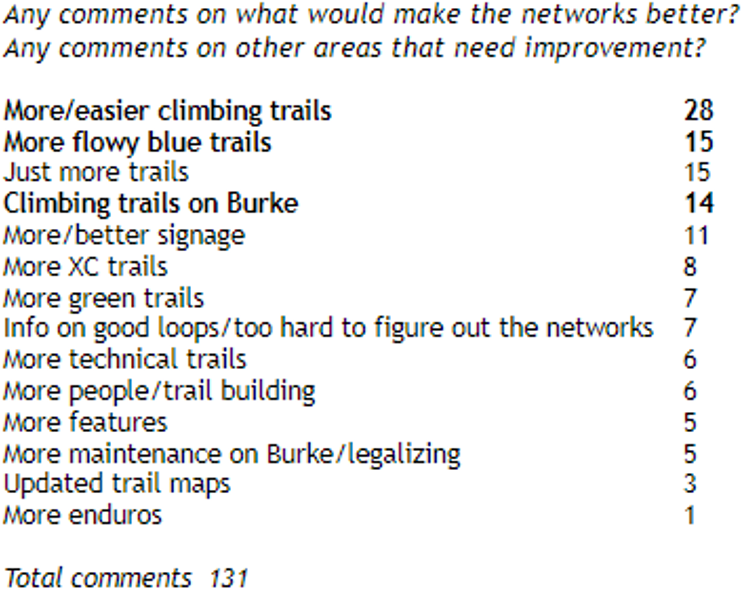 It is very clear that more and easier climbing trails are at the top of most respondents’ minds. Very interesting despite that the majority of respondents are experienced riders. We understand the need for more climbing trails. The access on Eagle is currently limited to get up higher and TORCA has been working with RSTBC and Ted Tempany’s company to plan a climbing and blue decend trail in the future. As we learn more, we will keep update the community. As for Burke… Burke is tricky because it is a provincial park and currently the new management plan is still as a draft. Thus, the work that can be done within the park boundaries is very, very limited. And we won’t know exactly what the management plan says until it is released for public comment. Therefore, you’ll be stuck with the logging roads to climb for a while longer. But trust that TORCA is continuing to dialogue with BC Parks, which have indicated that TORCA will be the mountain bike trail steward on the mountain.

We’re happy to know that 88% of you are satisfied with the communication and transparency of TORCA and its actions. In the past year, we’ve tried to step up our presence on social media and we think it’s paid off too, based on your comments. We do recognize that it is not perfect and it can be difficult to know where the best place is get current information. Our goal in the next year is to make sure that everything is shared on the website, Facebook, Instagram, and in the newsletter. Oh, and have you seen the new website? Go look at https://torca.ca. We revamped the whole thing!

The following chart was encouraging to us. To learn about what volunteer opportunities there are, visit https://torca.ca/get-involved/volunteer/ or email us at [email protected]!

37% live in Port Moody, 34% in Coquitlam, and 10% in Port Coquitlam. This is great, because that means the survey actually reached people in the Tri-Cities! This is slightly more than in the 2015 survey!

And finally, are you a TORCA member? 59% know what’s up and said yes! This is a significant increase from 48% in 2015. Thank you for your support and we hope you continue to be a member in the future. For those who are not (25% of you) or if you aren’t sure, please visit https://torca.ca/get-involved/become-member/. It’s only $20. Give it to yourself as a holiday present. Go ahead. The trails will thank you. And so does TORCA. More members = more goodness to come. And thank you again for completing the survey!

Have your say in Coquitlam’s Future Recreation Plans.

Support our work, join us at events, help build trails, and more!
Join Now
Join us